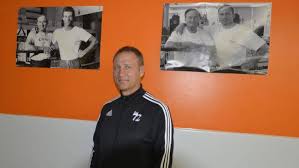 To say boxing has been a lifetime experience for Wayne Gordon would be an understatement. He literally teethed on boxing, grew up in the four-cornered ring, and tasted his first competition at the age of six.

Wayne’s career literally peaked when he was chosen by his peers to captain the 1984 Canadian Olympic boxing team in Los Angeles and later shared those memories with his Hall of Famer father/coach Taylor Gordon at the closing ceremonies.

Among highlights of his amateur career was his knockdown of soon-to-become world champion Mark Breland at those same 1984 Olympics and his knockout of another world champion, Torstan Schmidt, in Germany.

While he boxed professionally for several years and enjoyed some success – winning 12 of 16 fights with seven knockouts – it was his amateur calling that earned Wayne’s induction into the Sackville Sports Hall of Fame.

He lost only 29 of 130 bouts that saw him represent Canada internationally in the U.S., Bermuda, Australia, Finland, Sweden, Germany, Venezuela (1983 Pan-Am Games) and throughout the British Isles.

Wayne is the third member of the Gordon family to be inducted into the Sackville Sports Hall of Fame following the footsteps of his father, Taylor (2002), and his mother, Marina (2003).