The Sackville Sports Heritage Foundation was established in 1981 by a group of local residents with a mandate to honour amateur athletes, teams and administrators involved in local competition and beyond.

While the foundation and it’s mandate faded for a number of years, the Sackville Sports Heritage Foundation Hall of Fame was resurrected in 2002 with a push from former Sackville resident Ron Hefler.

Bill MacDonald, a former county councilor and MLA, succeeded Hefler as president in 2003 and was invaluable in keeping the Foundation alive until 2016. 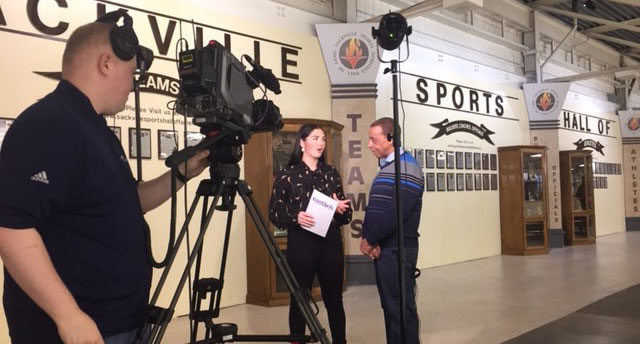 A new Executive Board was elected with a new name and mandate. The Sackville Sports Heritage Hall of Fame Society is a not-for-profit organization dedicated to the preservation of the memory of Athletes, Coaches, Officials, Teams, and any individual who has contributed to the promotion of excellence in sport, and who has conducted themselves in the up-most professionalism and character in the Sackville, Beaver Bank and Lucasville communities.

The first project was to design a new face for the Hall, a budget was established and Glen Reid was appointed Fund Raising Chairman. After three years of arduous work raising funds from the Sackville Community the Sackville Sports Heritage Hall of Fame Society held an opening ceremony on October 23, 2019.

Hubert Earle resigned as President in November of 2019. Darrell Dempster – vice president has stepped into the President’s position.

The foundation in the past has held an induction dinner and award ceremony to acknowledge those, who have contributed so much to the sporting aspect in the area. The current society held individual induction events in the Fall of 2021 due to the Covid Pandemic. An announcement in regard to the class of 2022 is expected to be announced early in the new year!