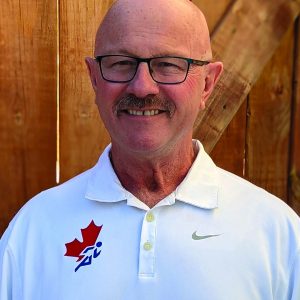 Stephen Lane has been a pillar of the Sackville sports community for decades. Most notably, Stephen has been recognized as one of the top Track and Field officials in the country. Stephen, an accomplished athlete, has selflessly dedicated his time and talents to the community through coaching, volunteering and officiating.

Growing up in a large family of athletes, it did not take long for Stephen to jump in with both feet. From the time he was a young child until well into his retirement, Stephen has been promoting and encouraging people of all ages and abilities to engage in sports.

Stephen began officiating Track and Field in 1980 when he was only 21 years old. Through his dedication and determination, he was qualified as a Level 5 Official, the highest level that can be attained in the sport.

During this time, Stephen played Football for Saint Mary’s University, holding the distinction of being the first player from Sackville High School to play for the University. He received a Letter of Merit and the Alumni Award for his involvement.