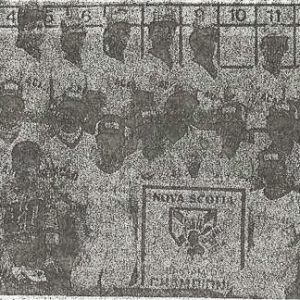 The Bantam “D” Boys provincial baseball team was selected from players competing in the Sackville “house” league of the Sackville Minor Baseball Organization.

The team was selected and managed by Dave Edwards, with assistance in the coaching ranks from Laurie Peverill, Bob Anderson, and Dave Amero. All of their efforts were helped by Sackville Hall of Famer Les Mayo, a long-time staunch supporter of baseball in the Sackville area.

During the 1985 season, en route to the provincial title, the team compiled a near-perfect record of 14 and 1. This record was compiled while often competing against teams from the higher “B” and “C” levels of competition. This group of mostly 13-year olds were undaunted by these competitors, and proceeded to the provincial tournament in Port Hawkesbury.

In the provincial tournament, pitching proved to be a dominant factor. Darrell Joyce pitched a no-hi????er and Trevor MacEachern pitched two shutouts, including a no-hi????er against the host team from Port Hawkesbury.

It is quite amazing that in only its second year of completion this team of young teens was able to capture a provincial championship. We are pleased to welcome them into the Sackville Sports Hall of Fame.