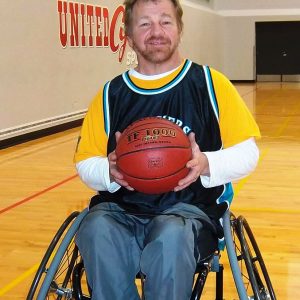 For Ross Raymond Sampson, the 1980s was a whirlwind of wheeling around the world and becoming one of Canada’s best-known wheelchair track and field athletes.

Following a near fatal car crash in 1980 that left him paralyzed from the waist down, Ross made a significant inroads to wheelchair sports that over the next few years would see him competing all over the world and peak for the 1984 World Wheelchair Games in Stoke-Mandeville, England.

Ross had a chance meeting with Rick Hansen during the Man In Motion’s trip through Nova Scotia in 1982 and attended a Pan-Am Games training camp in Halifax, both of which encouraged him to realize he could participate at a world-class level.

Marathon events were his favourite.

Ross was one of five Canadians invited to Marathon-Japan in November of 1983 and in 1984 was named to the Canadian contingent at Stoke-Mandeville where he competed in several event, the topping his performance with a third-place finish in the marathon.

He was the recipient of Sackville’s Outstanding Amateur Athlete Award in 1984 and was honoured by the Nova Scotia government at a Night of Champions dinner celebrating top amateur sports figures in the province. In January 1984, Ross joined the staff of the Recreation Council for the Disabled in Npva Scotia.