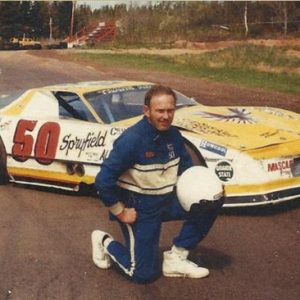 Whether it was Drag City, Atlantic Speedway, Truro, Antigonish or Scotia Speedworld, Lewis Kelly Jr. was as tough-as-nails competitor as you will find in Maritime auto racing annuls.

A regular at most of the area tracks, the former MASCAR champion was an accomplished driver whose talent and deeds are legendary at tracks throughout the Maritimes, particularly at Drag City (Middle Sackville), Atlantic Speedway (Hammonds Plains) and Riverside Speedway (Antigonish) where he honed those skills.

The 1985 MASCAR champion, honoured in June 2008 at Riverside as one of 10 champion Maritime drivers, retired in 1993 to manage son Scott’s meteoric rise among drivers that peaked in 1996 with a third-place showing in the Oxford 250 in Oxford, Maine. Young Scott also won the International Pro Stock Challenge in 1998.

Lewis remains one of the most respected of Maritime auto racing drivers and during his competitive days, as he remains today, a beacon to many younger drivers who sought his advice on how best to proceed at a particular time in their careers.

The newest member of the Kelly family inducted into the Sackville Sports Hall of Fame–he joins his late son, Scott–is a long-time associate sponsor of the Sportsman Division at Scotia Speedworld.