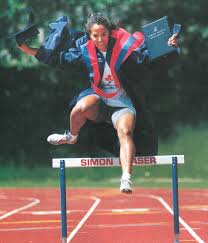 It wasn’t until she was in junior high school that Kim vanderHoek saw the writing on the wall, and it was all uphill from there.

“She was always a determined young lady,” says her track coach, Doug Mitchell. “She participated in all sports until near the end of Grade 9 when she saw the opportunities ahead of her.”

From the time she participated in her first national competition, the Canada Games in 1989, Kim was plugged into a track and field career that would take her into a world most young athletes can only dream about.

Kim’s all-round athleticism at Leslie Thomas and Sackville High – where she earned Athlete of the Year Awards – gave her a leg-up on competition when she took up the heptathlon, a two-day event taking in seven competitions and requiring both durability and diversity.

She has represented Canada at the World Junior Track and Field Championships (1988), the World Student Games (Manchester, England; Japan; Buffalo, N.Y.); the Francophone Games (Paris, Madagascar, Ottawa-Hull); the Pan-American Games in Winnipeg and the 1996 Commonwealth Games.

Kim enjoyed an amazing junior career, established provincial standards in both the heptathlon and javelin, and was Canadian junior champion in heptathlon – a sport in which she was ranked among the world’s top 10.