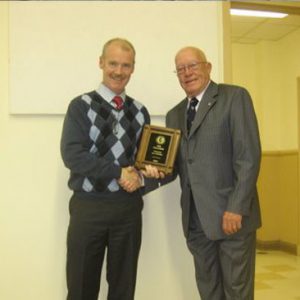 Hockey has been a passion for Ken Faulkner most of his life and it continues to bring him much joy as he continues his love affair as a member of the notorious Corner Boys during Sackville junior Blazers home games.

Ken was a tireless behind-the-scenes worker, a past-president and former executive of the fledgling Sackville Minor Hockey Association who involved himself in the building of the Sackville Community Arena in the 1970s.

He continued to play a key role through the 1980s and into the 90s with the Sackville Blazer junior team, serving as president and treasurer for the club that long has been considered one of the top minor hockey organizations in the Atlantic region.

It was Ken’s knowledge of hockey and financial background and his years of commitment to the Blazers that helped establish the foundation on which the team was built, leading to a string of provincial and Atlantic championships.

In addition to his executive responsibilities, Ken co-ordinated for a number of years team enrollment and was responsible for arranging game referees at the suburban Community arena.