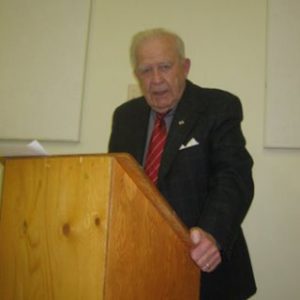 He’s been an integral part in the development of recreational programs and facilities in the Sackville region for some 45 years, so it’s not a coincidence that Hugh MacDonald’s induction into Sackville’s Sports Hall of Fame was a foregone conclusion.

In 1970, he spearheaded a movement leading to the construction of the Sackville Community Arena. Later the same year, he played a key role in organizing the first Lake District Recreation Association meeting and became that group’s first vice-president. He also served as treasurer of that body.

MacDonald’s subsequent fund-raising efforts through the years are legendary, starting when he arranged a $300,000 bank loan to raising another $130,000 in a door-to-door campaign that eventually led to the opening of the Community Arena in 1974.

At the same time, MacDonald was pursuing other interests which would benefit the Sackville region. As organizer of the Riverview Community Centre, he oversaw the drainage of swampland and landfill that formed the basis for two ball fields, tennis courts and a soccer field.

As president of the Riverview organization, MacDonald had a major role in establishing bingo operations at the Leisure Centre that would provide a continuing flow of revenue for sports groups, playgrounds and facilities in the Sackville region that raised some $10,000 in the first two months.