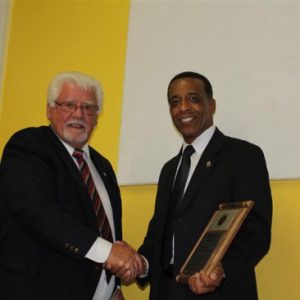 One thing can be said of Hubert Earle in his lead up to induction into the Sackville Sports Heritage Foundation Hall of Fame: He doesn’t take a half-hearted approach to the way things are done.

Hubert, recognized worldwide in professional boxing circles, is one of those people who can say through his contribution to boxing in the province, nationally and internationally, and more recently through his connection to martial arts, is that he’s “been there, done that.”

Earle, a member of the Nova Scotia Sports Hall of Fame, is recognized No. 1 globally by Pod Index—a worldwide group invested with the monitoring of professional boxing title bouts–as its most consistent judge.

Earle introduced the use of cat scans and infectious disease blood tests to the Canadian Professional Boxing Federation – now known as the Canadian Combat Sport Federation – and, as Nova Scotia’s first director of combat sports, continues to update rules and regulations for the provincial federation.

A lifelong resident of the Halifax and Sackville communities, Earle has been honoured by the Greater Moncton area for his contribution to boxing in that New Brunswick city.

Among his many achievements, he is an official for the World Boxing Association, International Boxing Federation, and New York State Athletic Commission. As referee-in-chief of the CCSF, he facilitates seminars for the national body at venues across the country.

As provincially appointed chairman and referee-in-chief of the Nova Scotia Boxing Authority, Earle’s experience in the ring is often sought out by medical staff and he continues to
assist in the development of officials in and outside the ring.