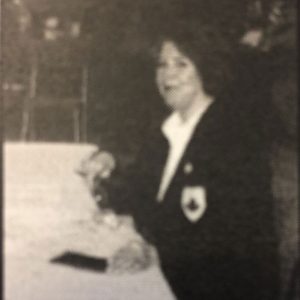 Greta Marina Gordon’s idea of a traditional family upbringing probably differed widely from what she grew up with in her native Newfoundland.

All of that was discarded when she wed boxer-coach Taylor Gordon in 1954, nurtured their off-spring sons through amateur ranks and then moulded her own image as one of the outstanding amateur officials in international boxing.

Once Marina sat around and absorbed some of the boxing culture in those early years, she jumped into the mix with both feet and emerged a certified Level 5B official in the International Amateur Boxing Federation (AIBF), the world regulating body. She is one of only five women to achieve that ranking at the world level.

Marina, Taylor, sons Wayne and Dwayne and daughter Ann moved to Sackville in 1974 and the family has been an enthusiastic supporter of the community since that time.

Her passion and abilities to function at the highest levels of the amateur boxing world made her a welcome addition to boxing tournaments worldwide. She rose rapidly in the local rankings through the 70s, earning Level I, II and III certifications while officiating at event in Nova Scotia and New Brunswick. In 1978, Marina participated in the Canada Winter Games in Grand Falls, NL.

With completion of her Level IV certifications, she officiated at competitions throughout Canada and the United States in the 1980s and was involved with the first know professional women’s boxing card sanctioned by a provincial body in Glace Bay, N.S., in 1991.

Marina represented Canadian amateur boxing at numerous events, among them the first women’s international tournament in Turku, Finland (1999) and volunteered at the Atlanta Olympics (1996) and the Winnipeg Pan-American Games (1999).