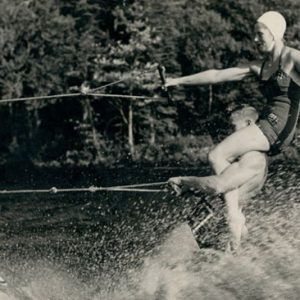 In the long-ago days, long before Sackville was touted as Canada’s fastest-growing community, water skiing was making inroads as one of the region’s more popular sporting activities at family outings.

And forefront in the Maritime water-skiing community of the 1950s and ’60s was the queen of water skiing, Sackville’s Eileen Burke.

Eileen honed her skills at Comeau’s Beach on First Lake, near the family cottage, through the late ’40s and became an early advocate for women ready to juice up their recreational water-skiing skills to another level of competition.

She was recognized throughout the Maritimes as the sport’s most renowned female water skier of her time. Her fame spread south to the water-skiing capital of the world, Florida, where, in a letter dated March 30, 1957, she was invited to join the famous Tommy Bartlett Florida Water Ski & Jumping Boat Thrill Show. She would have demonstrated her skills in three shows daily between June 21 and Sept. 2.

But she never got an opportunity for the rest of the world to enjoy her performances, Eileen was forced to decline the invitation, as much because she had her family here as for the fact she was in the late stages of giving birth to a son, Paul, who arrived on April 3.

While she was in actual competition only eight years, 1953-1960, Eileen dominated the winner’s place at the top of the podium with eight consecutive Nova Scotia championships. She was also a headliner at water-skiing events throughout the province for nearly a decade, especially while accompanying Nova Scotia Power Boat Association competitions where her husband, Jock, was a fixture.