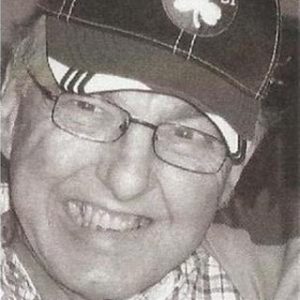 There was a very good chance that if you were involved with sports in the Sackville area, the name of Donald Syms (Punch to his friends, from former Leafs coach Punch Imlach) was known to you.

Even though diagnosed with cerebral palsy at birth, Donald developed, and never lost, a passion for all thing sports, whether playing a little first base himself, or more often coaching, managing, mentoring, or just being around the gyms, halls, rinks, and fields where people were competing.

As early as the 60s saw Donald involved as manager of the Sackville Heights Junior High Boys A Basketball team, and this enthusiasm continued on to his time at Sackville High, where he was actively involved as manager of soccer and basketball teams. Even afer school Donald coached both mens and womens teams in basketball and fastball, successfully winning many championships during these years. Many of his players have gone on to recognition in their respective sports, including athletes such as Wayne Grantham, Robert Upshaw, and Brian Williams.

One of Donald’s great passions was working with the Chebucto Track and Field Club, under Sackville Hall of Famer Doug Mitchell. Many hard-working but happy hours were spent working with these athletes.

Donald never backed down from a challenge, as any who visited the Tim Horton’s on Beaverbank Road could tell us. His brief battle with cancer this year proved to be an obstacle he was unable to overcome, and we lost Punch in March of this year. He will be greatly missed in the world of Sackville sports, and we are pleased to honour him with admission to the Builders category of the Sackville Sports Hall of Fame.