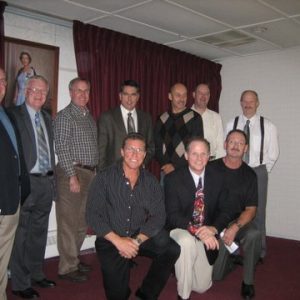 The second of two successive Nova Scotia Junior C championships for the Sackville Blazers hockey team was something special.

“Most of the 1977 team was made up of local players,” recalls Tom MacDonald, who played for both clubs. “That and the fact it was the last time we were together as a team made it sort of special.”

The Blazers definitely had a local flavour with 12 members from the Sackville, Bedford, Waverley areas.

It was also the launching point of a junior program that was to become one of the most successful hockey operations in the Maritimes and the foundation for today’s highly regarded Junior B championship organization.

From the top down – with the likes of Bill Chase, Pat Currie, Rod Gillis, Bob MacDonald, Bernie Bishop, Fred Grace and Hugh MacDonald working behind the scenes at the start – it’s become almost an annual obsession over nearly three decades for Sackville Blazers to go far in the playoffs.

The 1977 team dominated provincial junior C competition, winning the league championship and the playoffs and capping the season with the Nova Scotia title with coach/general manager Scott Lee of Timberlea behind the bench. Two of Lee’s sons, defencemen Randy and Rick, were among the six imports on the squad.